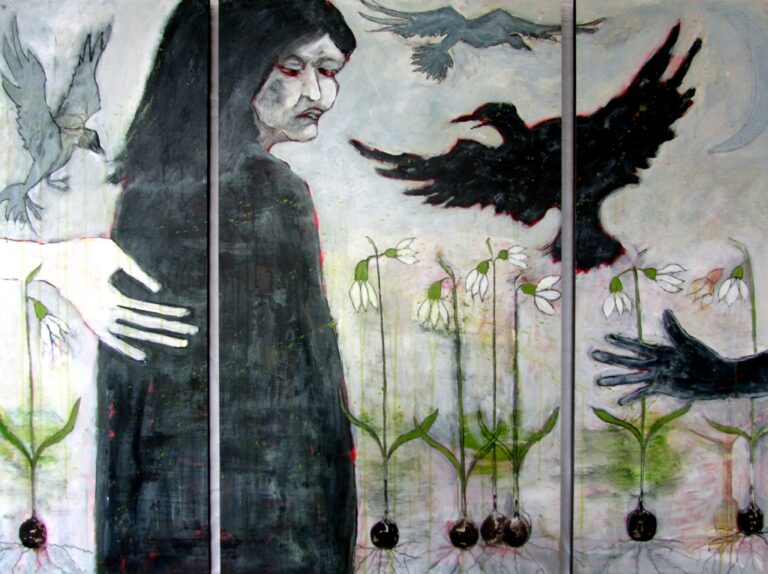 Shadows of the Earth
Paintings and Drawings by Patsy Connolly

Burren College of Art is pleased to host an exhibition by Burren-based artist, Patsy Connolly.
The works in this exhibition express the notion of duality: darkness and light, death and rebirth, consciousness and the unconscious.  They underscore the multilayered and mysterious nature of our lives, where spirits, ghosts, ancestral influences, inner voices, and untold stories all have their place and need to be integrated if we are to attain some semblance of wholeness.

The exhibition will be opened by Mary O’Flaherty.

Patsy Connolly’s paintings and drawings are semi-abstract, symbolic, and reflect the inner landscape of feeling, imagination and personal narrative.  A keen interest in Jungian, Archetypal Psychology & Alchemy finds echoes in the work, which draws on Unconscious Symbolism, Myth, Dream motifs.

She completed a BA in Fine Art in Galway in 2015, has taken part in workshops and master classes at the Burren College of Art (BCA), Lodestar School of Art, New York Studio School, St Ives School of Painting, West Dean and Schumacher Colleges of Art, UK, and has undertaken residencies at Cill Riallaig, and BCA.

Her paintings have been exhibited at the Royal Hibernian Academy and the Royal Ulster Academy, The Visual Carlow, Burren College of Art, De Valera Gallery, Ennis and The Court House Art’s Centre, Ennistymon.

She has a doctorate in Molecular Genetics, and worked previously in research and education.

Shadows of the Earth

‘By adopting rational and sentimental approaches, we seek to subdue nature and keep it in ‘its place’.  To live in this world sustainably, however, we need to transcend our fears and confront its darker aspects – the unpredictable, the catastrophic, the encounter with darker gods, with Pan and Hecate, and the chthonic underworld figures.’ ((James Hillman)

The works in this exhibition express the notion of duality: darkness and light, death and rebirth, consciousness and the unconscious.  They underscore the multilayered and mysterious nature of our lives, where spirits, ghosts, ancestral influences, inner voices, untold stories… all have their place and need to be integrated if we are to attain some semblance of wholeness.

For several years, Patsy Connolly has attempted to portray the diverse faces of nature by expressing a personal story, symbolically.  The work exists in four subsections.

‘Hauntings.’  Multi-layered, semi-abstract self portraits and other figurative works are based on the artist’s childhood memories and imaginings.  Primitive ghostly figures appear, beckoning, calling, transforming.  Paintings begin with intense, intuitive drawings,
layer upon layer of paint, sand, varnish and sometimes collage follows in a seemingly never ending cycle of destruction and renewal:  A  ritual through which emotions are processed.

‘The Dance’ consists of an installation of drawings which emerged from a highly charged dance performance, reflecting the vibrancy, joy, ecstasy, sadness, terror, sensuality and sexuality, that make up a life experience.  Several gestural, charcoal drawings  are superimposed and the final pieces attempt to capture the essence of the movement of the performing body and the emotions evoked.

And then the Cailleach … considered to be the winter manifestation of Bridget.  In other mythologies she is the crone, the wise woman, the witch, the hag.  In Gaelic Mythology she personifies the elemental powers of nature especially in its destructive aspect – strong winds, rough seas and craggy outcrops. Although associated with battle, strife and death, the Cailleach is also the weaver of destiny, fate and birth.  Her father is Dagda and her mother, Morrigan.  Morrigan, who like Bridget, is a triple goddess and can manifest as three hags or three crows. These works represent this lineage and the winter descent into darkness.

In childhood, nature, solitude, poetry and her mother’s garden, provided the artist with a life enriching sense of the sublime, and the final series, ‘The Garden’ in its response to the colours, textures and forms in her own garden during the summer months, reflects this experience.

If a path already exists it is someone else’s path.  Both paintings and drawings reflect the multiple narratives of our lives and invite us down the steps to the dark dungeons of the psyche.  But just when the darkness seems to intensify we encounter the transforming possibility of integration and light.