Our dynamic faculty and graduate mentors support our students through their diverse interests and fields of knowledge. 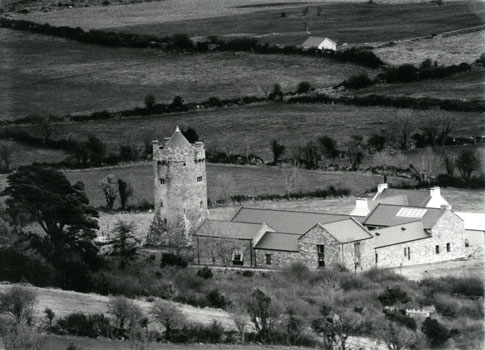 Conor McGrady is an artist from N. Ireland whose work examines the relationship between ideology and the politics of spatial control. Primarily executed in black and white, his often large-scale paintings and drawings explore various manifestations of social order and raise questions relating to the control of space, personal and national boundaries.
Read More
Áine Phillips is a visual artist, writer, curator and academic based in Clare where she is head of sculpture at Burren College of Art since 1999. She has been exhibiting multi-media performance works, sculptural installation and video in Ireland and internationally since the late 80’s. Her work is socially engaged and she has created work for multiple contexts; public art commissions, diverse community contexts, the street and club events. Her work has also been presented in galleries and museums including TATE Britain, Stanley Picker Gallery & Performance Space London, TROUBLE Festival Les Halles Brussels, City of Women Festival Ljubljana, NON Festival Bergen, Kyoto Art Centre, Judith Wright Centre for Art Brisbane Australia, Tanzquartier Vienna, Moving Image Gallery and The Kitchen New York, National Review of Live Art Glasgow, Mozovia Art Centre Warsaw Poland.
Read More
Ruby Wallis is a visual artist who lectures at Burren College of Art and NUIG. Selected exhibitions include; The Lab, The Gallery of Photography, Belfast Exposed, The Dock, Vondelbunker- Amsterdam, Ormston House, TULCA, Perlman Teaching Museum, USA. Selected publications include The New Yorker magazine, British Journal of Photography, Winter Papers vol.6. Wallis is on the board of directors, Engage Art Studios, Galway. She is a recipient of a Visual Arts Bursary Award 2020 from the Arts Council of Ireland and has an upcoming residency at Centre Culturel Irlandais 2021.
Read More
Eileen Hutton is a visual artist whose practice aims to generate reciprocal relationships with the more than human world and in the process create replicable models for informed ecological actions.
Read More
Frank Golden was born in Dublin and has been living in the Burren for almost thirty years. His publications include the poetry collections; ‘gotta get a message to you (Salmon Publications) “In Daily Accord” (Salmon Publications), “The Interior Act” (Salmon Publications), “On Route To Leameneh” (Raven Arts Press), “In Partial Settlement” (Wiffle Press), and two novels, “The Two Women Of Aganatz” (Wolfhound Press) and ‘The Night Game’ (Salmon Fiction). He has written two screenplays WHERE TWO ROADS MEET, and THE CALLER both of which received Arts Council and Film Board funding.
Read More
Gordon is a leading expert in Irish heritage with an MSc in Environmental Science from Trinity College Dublin. He has a particular interest in the Burren, which he has researched extensively for many years and he is an authority who is regularly consulted and who leads field trips for students and visiting scholars.
Read More
Miriam de Búrca is a visual artist who works primarily with film, video, drawing and installation. She studied at the Glasgow School of Art and Ulster University in Belfast, completing a BA (1996), MA (2000) and practise-based PhD (2010) in Fine Art. Her work deals with issues around identity, how this comes to be expressed through the marking out of territory, and how landscapes become shaped by power dynamics and the belief systems that uphold them. She has exhibited nationally and internationally in cities such as Dublin, Belfast, London, Berlin, Warsaw, Prague, Lisbon, Montreal and New York.
Read More
Tamaru Hunt-Joshi completed her PhD in Ecology in the Departments of Ecology and Evolutionary Biology and Department of Entomology at Cornell University, Ithaca, NY. Her scientific background focused mainly on Plant Ecology and Entomology with her PhD research investigating the influence of root and leaf feeding herbivorous, biological control insects on a species of European wetland plant (purple loosestrife) that are invasive to North American wetlands.
Read More

Peter Power is Associate Professor, Chair, in Printmedia at School of the Art Institute of Chicago.
Read More
David is Professor and Head of Programme, Painting in the School of Fine Art at the Royal College of Art, London.
Read More
Nigel Rolfe is recognized as a seminal figure in performance art, in its history and among current world practitioners.
Read More

Cathy Fitzgerald, PhD, is a New Zealander, eco-social artist, researcher and educator now living in Ireland, the home of her ancestors. She is passionate that ecoliteracy be an essential teaching to all art students, advocating what Joseph Beuys argued many decades ago, that ecoliteracy is essential for expanded ecological citizenship – the necessity to live well with the Earth and all its inhabitants.
Read More
Alexei Monroe is a London-based, non-aligned cultural theorist and writer. His book on Laibach and NSK has been published in Slovenia, America, France and Germany. In 2010 he co-organised and moderated an international 3-day symposium on the work of Laibach and NSK as part of Laibach’s 30th anniversary event, Red Districts, Black Cross. In October 2010 he was programme director of the First NSK Citizens’ Congress held in Berlin and edited the Congress book, State of Emergence. He was co-editor of Total State Machine (PC Press 2015), a major publication on the British industrial group, Test Dept. He writes on and reviews a wide range of electronic music. He was a member of the organising committee of the 2nd NSK State Folk Art Biennale held in Ireland in June 2016. In November 2016 his book, Autopsia Thanatopolis, on the Czech-based multimedia art group, was published by Divus. He is currently researching issues around the cultural reception of Brutalism and was a keynote speaker at the Nonument! architectural symposium held in Ljubljana in February 2018. Other current research interests include German techno, Kraftwerk, the connections between industrial music and British science fiction and the history of the Stag as a symbol. He runs the electronic music label VEB89 and is also active as a DJ.
Read More