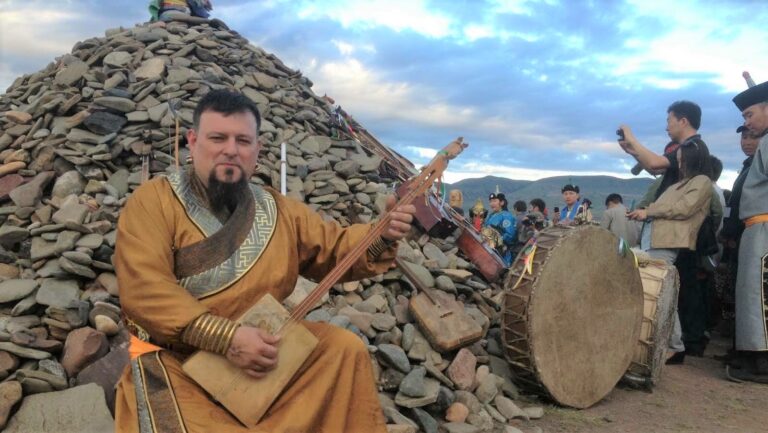 Click HERE to reserve your place in the workshop

Concert | 8pm in the Lecture Hall

Burren College of Art, in collaboration with 2 Gyrlz Performative Arts, is pleased to host a special concert and throat singing workshop, given by the most highly decorated Throat Singer outside of Tuva, Enrique Ugalde (aka Soriah).

The workshop will run from 2-5pm, followed by the concert at 8pm.  Both will take place in the Lecture Hall on the Burren College of Art campus.

⁃ We will discuss the anthropological and historical and cultural context of Khöömei.

⁃ We will apply those techniques to traditional melodies.

⁃ We will discuss how to keep this ancient tradition alive into the future.

ALL SKILL LEVELS ARE WELCOME!

Concert Tickets can be purchased HERE

Soriah is the stage persona of Enrique Ugalde, a performance artist, instrumentalist and throat singer. Born in California in 1971, he is now based in both Oregon and the Tuvan Republic (Asia).

In 2008 Enrique was awarded “Best Foreigner” at the Üstüü-Khüree Festival and received the Third Laureate award in the 2008 Fifth Quinquennial Ethnomusicology Symposium, the highest honor a non-native Tuvan had yet achieved in this field. In 2014 he won second place in the Tuvan National Kargyraa Competition, and in 2016 was awarded the “The Greatest Innovator of Kargyraa” (one of the three primary sounds of Tuvan throat singing) in the same competition.

When not competing internationally or spending time in Tuva with his magical son “Enriquito”, Enrique showcases to sold-out crowds in Europe, Japan, Mexico and the United States. He was a noted performer at the 2009 Peace Ball to celebrate Obama’s inauguration in Washington, D.C. and collaborates in performance installations at Burning Man, Symbiosis Gatherings and other festivals.

Through his extensive humanitarian work, Soriah is crafting a new awareness and helping others to experience this ancient art form with fresh eyes and ears.

Khöömei (pronounced, “hoo-mei”) is an ancient style of singing believed to originate in an area now known as Tuva in Southern Siberia. The trance-like intonations are created by manipulations of the throat region that gives rise to two or more harmonizing pitches over a fundamental resonating frequency. For these reasons, Khöömei is commonly referred to as Tuvan throat singing amoung the Western Nations. Khöömei is an oral tradition-based cultural phenomenon that developed, in part, due to the spacious landscape of Southern Siberia. Singers often will seek out just the right river bend, steepe or  mountainous cliff, searching for a balanced positioning which will prove most conducive to their throat singing, leading to resonant vocalizations able to traverse great distances. The heart of Khöömei lies in the inherent animism expressed in the mimicry of natural sounds. It is said that one can call a deer or moth to oneself given the proper technique met with purity of intention. It is unknown as to how old the practice has been in place. The Tuvans say that Khöömei is from a time before language.