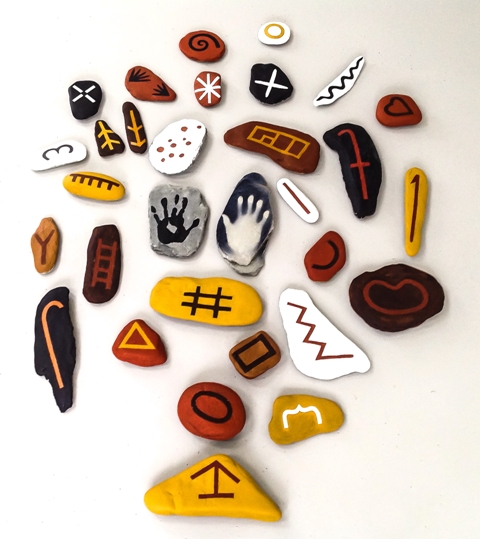 For the 2018 Burren Connection Exhibition, we are pleased to host Early Marks.

Early Marks is a study of the beginnings of art and possible source of a prehistoric worldwide visual language through large-scale paintings and sculptures by UK/Ireland artist, Keith Payne. For many years, Payne worked in the entertainment industry which enabled him to travel the world and pursue his interest in prehistoric art.

A Geno-graphic Map  of human migration out of Africa acts as a guide to locating the places in the world relevant to the images displayed.

There is no Time associated with any of the works, as Time is a construct invented long after the images on exhibition.

We have subsequently named this state ‘Animism’, describing it as a belief that all things animate and inanimate have an intention of their own where there is no boundary between the physical world and the spiritual or ‘Other ‘ world.

Many remote tribes around the world today who limit contact with modern life still retain such a vision; their world of spirits is not a primitive or pagan religion, but a natural perception of people who remain integral to the natural environment.

Western thought is based on the philosophical theory of dualism, that matter and spirit, body and mind are separate states that cannot blend. Yet with the current research in quantum physics the idea of the perception of reality allows for multi –dimensions.

The language of ‘Early Marks’ consists of imagery, symbols and patterns that have been left in the physical world but created in the ‘other world’.

Many of the forms are possibly direct projections of the electrical impulses from the brain seen during states of altered consciousness, ‘Entopic’ images that manifest as points of light in the absolute darkness of the mind in the cave.