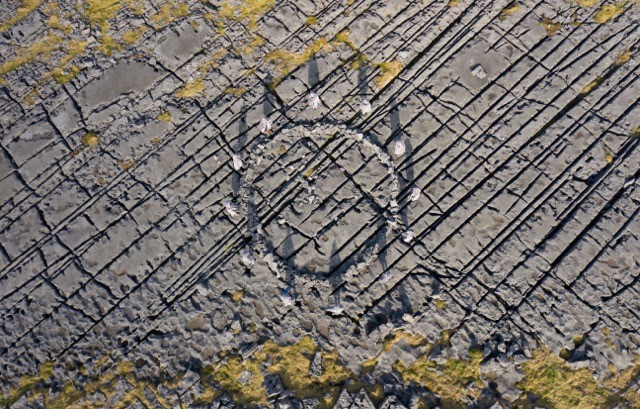 In 1975, world renowned sculptor Richard Long created “A Circle in Ireland” on Doolin Point at The Cliffs of Moher, Co. Clare. Over the years the stone circle has fallen into disrepair. Burren College of Art students and staff collaborated with Galway 2020, Clare Arts Office and Creative Ireland to restore the circle during a performative event that was filmed on location during February 2021.

“Coming Full Circle”, the film of the event was premiered on Galway 2020’s online platform and Clare County Council Arts Office’s website in the summer of 2021 and has since been selected for screening at international Film Festivals: 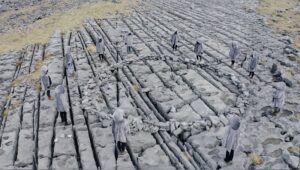 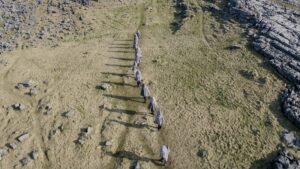 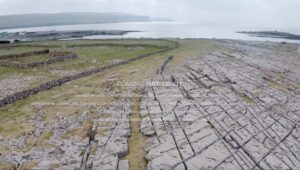 The film was created by the post graduate students of Burren College of Art, with artistic direction and performance cordiation by Dr Áine Phillips, Head of Sculpture. Cinematography was by film artist Tom Flanagan and musician/sound artist Brian Fleming composed a sound score to accompany the performance. Masters of Fine Art, PhD and Post-baccalaureate students devised and performed the ‘restoration action’.

In response to Burren College of Art’s proposal to perform a restoration action at “A Circle in Ireland”, Richard Long wrote:

“travelling” sculpture: three concentric circles, in segments, which I assembled

in different natural locations. The circles were the same, but each place gave its

particular characteristics to the work, like undulations, or stones, for example.

It was sculpture as place, so the work was unique at each place, like a footprint.

In 1974, from near Doolin, I started a coast to coast walk across Ireland, placing

Since making my first circle in nature in 1966, I have made many circles in different natural

landscapes in the world, from the Andes to Africa to Antarctica.

Often these sculptures are like stopping places on long distance walks. They are usually

anonymous, temporary marks of passage. Originally my Circle in Ireland was intended like

this, but by now it seems to have taken on a life of its own. With the attention of the students

of the Burren College of Art, I think the work is in good hands. 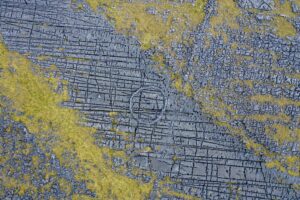 Thanks to Richard Long, Rachel Cartwright and Tate St Ives

The Burren Geopark and The National Parks and Wildlife Service, County Clare