In this Undergraduate Course, you have complete immersion in the Burren – a living laboratory for creative minds 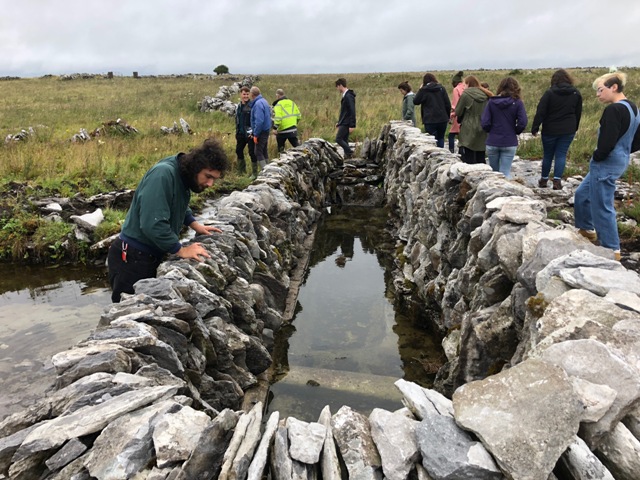 We will investigate, with a combined science and fine art practice, how our social and earth ecologies coexist and interrelate. We will examine ways anthropogenic influences are shaping large-scale interactions of climate, oceans and the biosphere to define our shared environment. Class meetings will include seminars on the scientific discourse around ecological thought, as well as discussions of contemporary fine art practice by faculty and visiting Irish artists, and local experts of The Burren. Multiple field trips and excursions into the local landscape and cultural surroundings will be an important component of the course. Environmental and social justice, ecological thought, and activism will be central themes.

Students may earn up to six credits on successful completion of the summer school (3 studio, 3 science) 200/300 level.

Evaluation will be based on the following criteria:

Participating students will have dedicated studio space in order to explore their own creative practice in response to the concepts presented in the class. Students will be expected to read contemporary ecological theory, write, research and articulate their findings and ideas to the class. Student participation will be drawn from a variety of art and design institutions associated with the PALS consortium, a program of the Association of Independent Colleges of Art & Design (AICAD). Students can anticipate an immersive, stimulating, and intellectually enriching experience that fosters critical dialogue and international connectivity while pursuing their own artistic growth.

The course will be co-taught by Hugh Pocock and Emily Bosanquet.

Born in New Zealand and raised in the United States, Hugh Pocock’s work seeks to integrate the dynamics of natural and cultural phenomena. Pocock’s work inhabits the space where the “natural” and the” technological” are inseparable. Organic materials, such as water, air, salt, wood and earth and the processes of labor and industry are the platforms on which Pocock’s work are built. The history and metaphor of the human relationship to natural resources, time and energy are among the issues Pocock investigates in his sculptures, installations, performances and videos. Over the past two decades, he has shown his work in Los Angeles, San Francisco, New York, Santa Fe and Baltimore as well as internationally in the former Soviet Union, Germany and China. His work has been exhibited in galleries and museums including Portikus Museum in Frankfurt, Germany, the Wexner Museum, the Santa Monica Museum of Art and the Baltimore Museum of Art. Pocock’s work has also been built for “non-art sites” such as private homes, movie theatres and farms. He received his BFA from the San Francisco Art Institute and then completed his MFA at UCLA in New Genres.

Hugh Pocock is a full time faculty member at the Maryland Institute College of Art and is the Co-Director of MICA’s new Major “Ecosystems,Sustainability and Justice”.

He has been the MICA PALS Fellow since 2010.

Emily Bosanquet is a science educator interested in interdisciplinary practices as a way to examine the connections between natural phenomena, social and cultural dynamics, and the political, legal, and economic institutions that organize our lives. Bosanquet teaches at the Pacific Northwest College of Art (PNCA) where she has published and presented on art and science methodologies. She also teaches secondary science across diverse communities within the public-school sector.

Bosanquet has worked as a geologist and environmental scientist in Australia, South East Asia and the United States. She studied at the University of Edinburgh, Scotland, and holds graduate degrees from the University of California, Santa Barbara and Lewis & Clark College, Portland, Oregon. Bosanquet is the founding Director of the Art + Science Initiative at PNCA and the representative to the Partnership for Academic Leadership in Sustainability. She currently holds the position of Project Director for 2020 ACIAD/NOAA Fisheries Art & Science Fellowship in partnership with the Independent Colleges of Art & Design and NOAA Fisheries.

Burren College of Art Summer School offers a concentrated individual-centred course of focused and dedicated learning. Set in the historically rich and environmentally unique context of the Burren in the West of Ireland, this programme is designed to assist students develop a cohesive body of visual work. The programme is open to artists and art students, but may also be of interest to individuals with knowledge in the fields of history, archaeology, anthropology, ecology or environmental science. Artistic practice and its creative methodologies will be used as a means to investigate interdisciplinary connections between certain sites and the historical, cultural, social and environmental narratives that frame them. Studio projects will emphasise engagement with assigned topics, with dedicated technical assistance appropriate to each students level and concentration provided.

What is really unique and enriching about taking a science course in combination with a studio practice is the opportunity you have to make and respond to the scientific content; transforming, translating and situating the science in the cultural sphere, thereby allowing for a different sort of access, interrogation and response. As we consider the social and ecological concerns we face as a society—biodiversity loss, water scarcity, climate change, environmental and social justice—we can incorporate scientific investigation alongside creative research, making, and collaboration with scientists and communities to foster new critical ways to engage and conceptualize the concerns.

Global Ecologies Studio will develop and inform your art practice, supporting you as you become an independent critical thinker and maker surrounded by a peer group of international artists, and connecting you with regional professionals as you gain familiarity with current ecological discourse. You will have access to faculty with expansive experience in teaching in art colleges and with strong professional practices, and be immersed in the fascinating cultural history and the inspiring and scenic beauty of the Burren landscape.